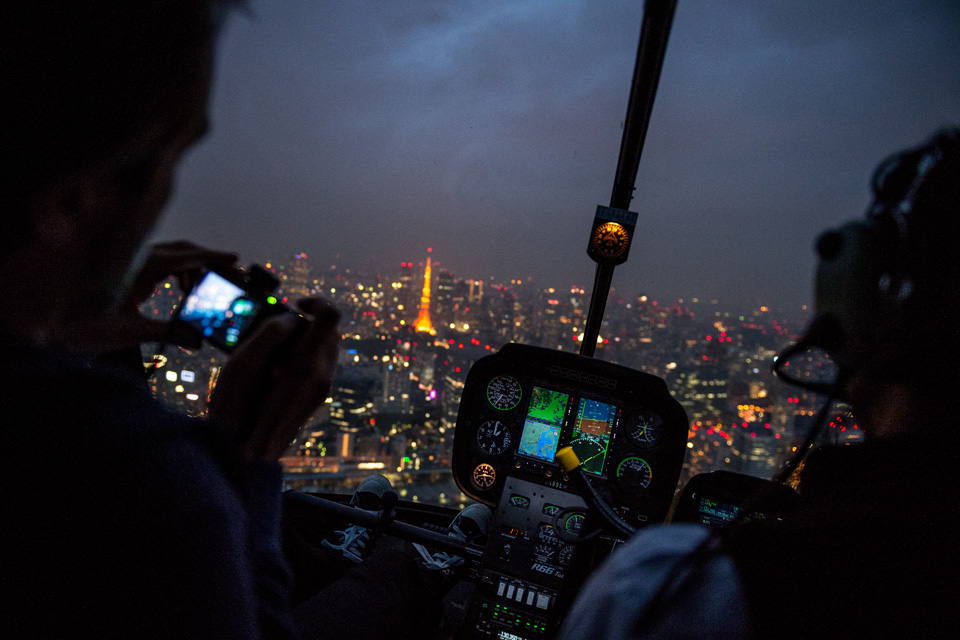 The Fear & Excitement of Flying

It is truly exciting and magical to be flying at dusk in a helicopter 1000 feet above the great Tokyo metropolis. The city stretches to the horizon, appearing endless as its edges disappear into the evening haze.

I had never been in a helicopter before and the whole day leading up to our recent flight I was stricken with anxiety, even dread. Having a small fear of heights I was worried I wouldn’t enjoy it—that I’d be crippled with fear incapable of even looking out the window. Cut to 5 p.m. on Saturday night. As the main rotor roared with vigor and the chopper lifted off the tarmac, I bore an ear-to-ear grin in delight. 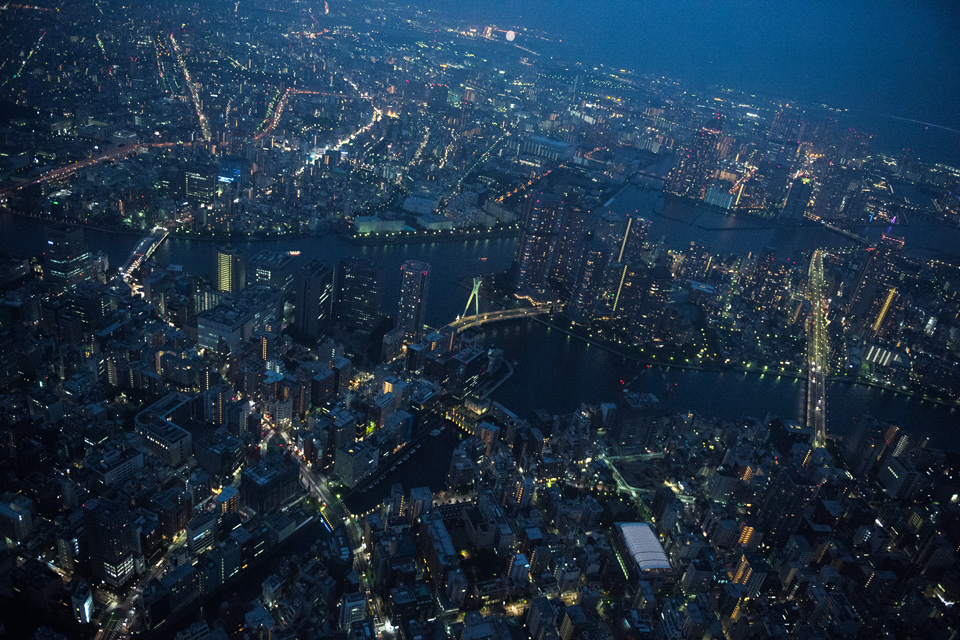 Soaring Through the Sky

Axel, myself, and Fabien, the winner of our recent photo contest took to the skies in a small 4 seat chopper based out of the Tokyo Heliport located near Shinkiba station. The flight lasts only 15 minutes, which flies by between the excitement of flight and our preoccupation with our cameras and getting the shots we were after. I made sure to put the camera down for a minute and took time to simply enjoy the sensation of flight.

Having only flown on commercial airliners in the past, I was expecting a similar amount of vibration, noise, and general discomfort. I was pleasantly surprised to find that the whirlybird took off and moved smoothly as though it was on silk. With a firm jolt of effort from its rotor—whoosh—we were airborne. The chopper lifted into the evening sky like a bird would. 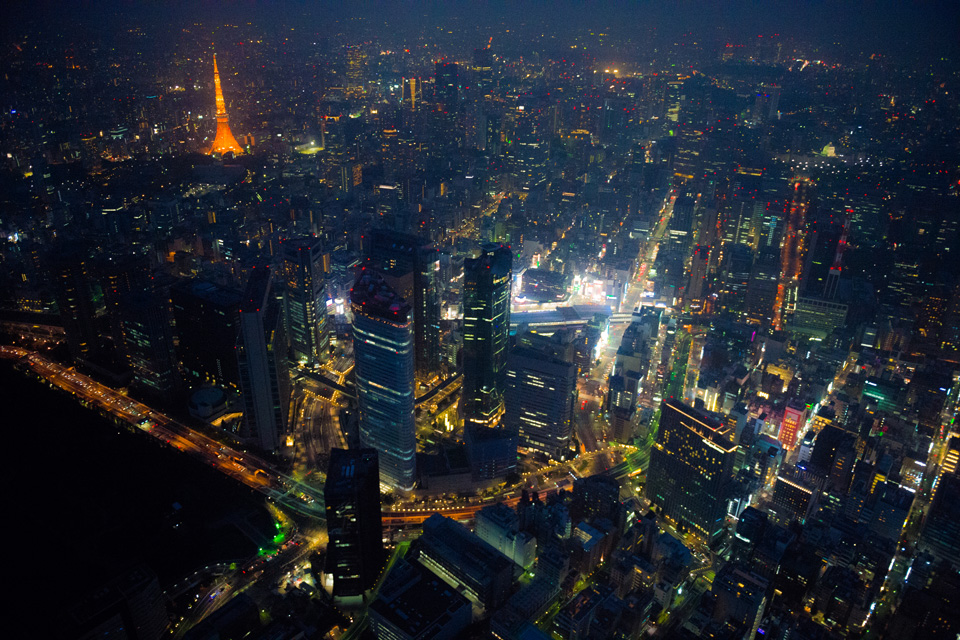 A Learning Experience: Photography at 1000 feet

Once in the air, the immediate joy of flight took a back seat to the urgency of photography. We had only seconds to capture the scenes below as the chopper turned and banked on its way over the eastern side of the city. As Ginza, Yaesu, Kanda, Akihabara, and Ueno passed below, the three of us feverishly snapped away to get as much as we could during the short flight.

Shooting from a moving helicopter in dark night conditions proved quite challenging. We scheduled our flight for sunset, but the weather proved uncooperative—a heavy overcast smothered the setting sun. What should have been golden hour ended up being a dimly lit, deep blue soup. The atmospheric haze also posed a problem for auto-focus. Between the weather conditions and the fact that we were shooting through glass, it was very challenging to get tack sharp images. 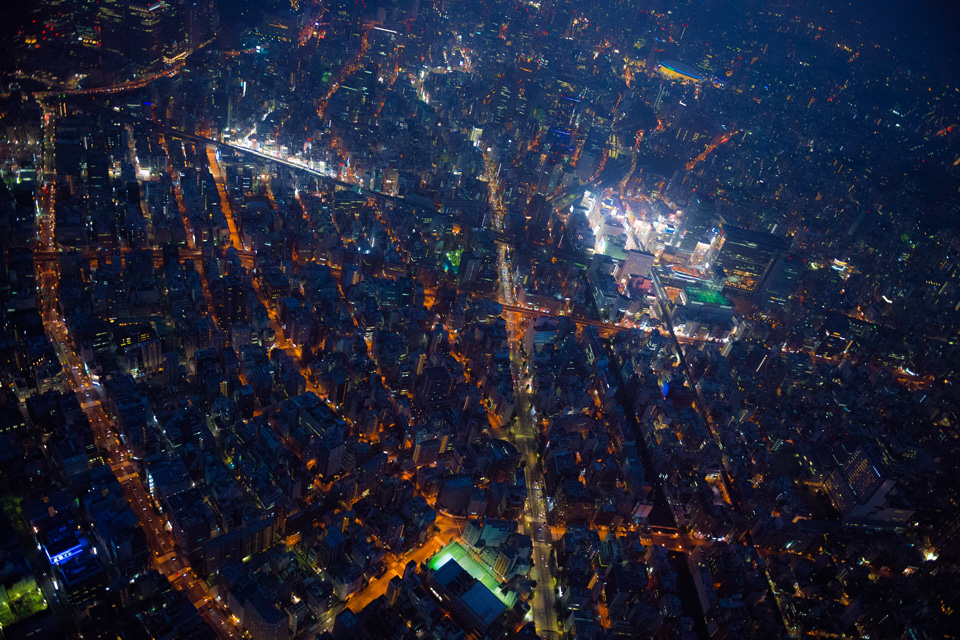 How to Shoot from a Moving Chopper

It should go without saying that these were conditions that called for fully manual exposure. I set my camera to f/2.8, 1/100, ISO 6400. All of the photos in this post were taken with these settings. Had we had the expected sunset light, I could have gone with 1/250, which would have been a very preferable shutter speed given the situation. Unfortunately, my lens/camera combo did not include any kind of optical stabilization, which would have been a huge help.

A better strategy might have been to turn off auto focus. I was confident that my camera (Nikon D4 with 24-70mm lens) would have no problem focusing on the city below. This was generally the case. However, taking the time to focus on each shot proved to be a time consuming. In retrospect, it would have been much more efficient to focus to infinity and leave it at that. This is something I’d like to try next time.

All in all, for my first time shooting from a chopper, given the conditions, I am pretty happy with the results. 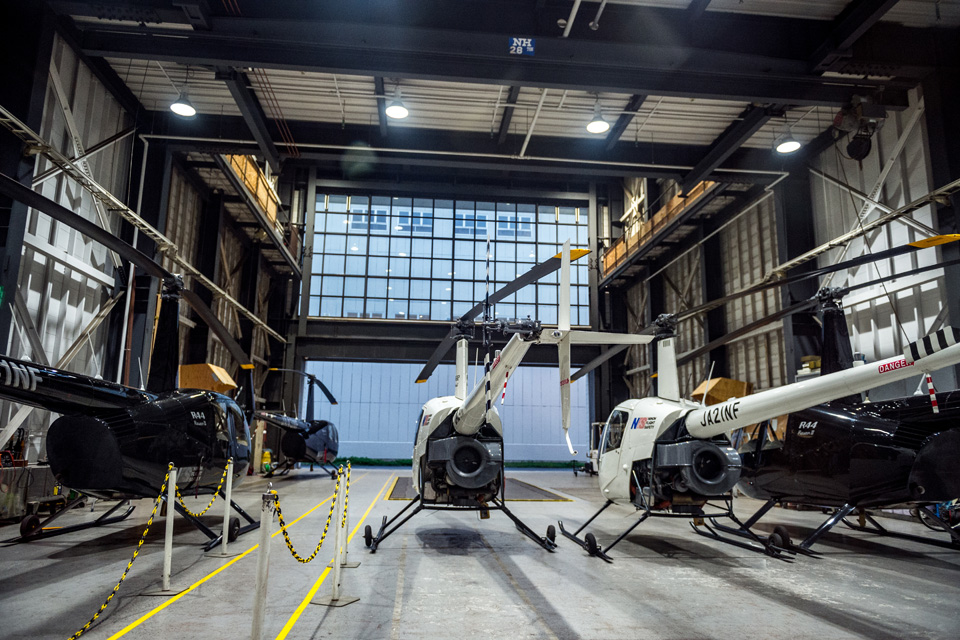 This flight wasn’t just for our amusement. We also wanted to see if it could be a viable option for a photography workshop/tour. After experiencing it, we believe it very well could be the next tour in our line up. Stay tuned for more info as we worked out the kinks and plan our new photo adventure in the sky! 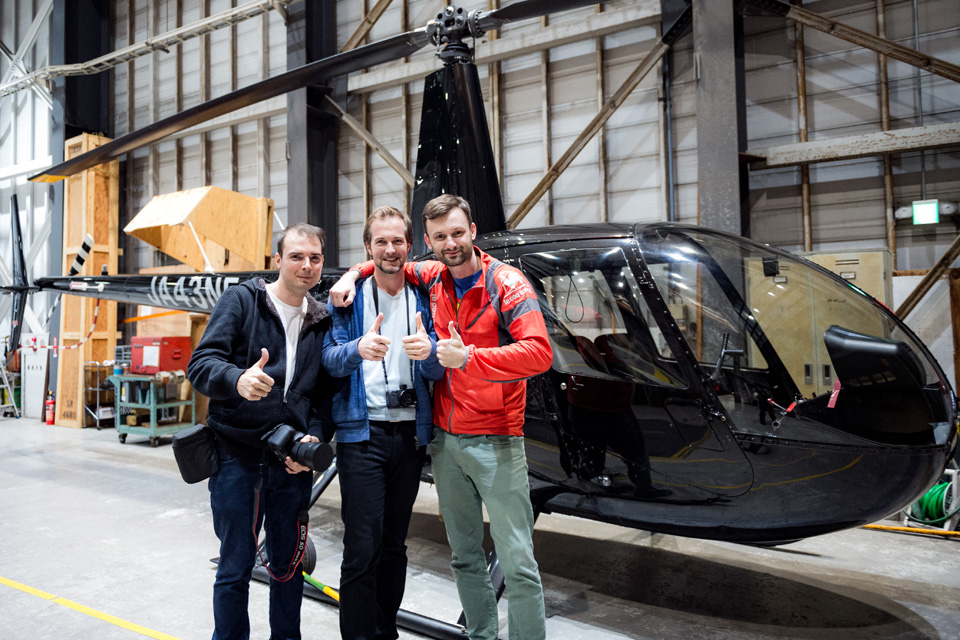 Three happy future chopper pilots give a thumbs up after a successful flight.

Category: Shooting in Tokyo
Tags: Cityscape, Helicopter, Tokyo
Want to get the latest photo tips and stories in your mailbox?
Read some more