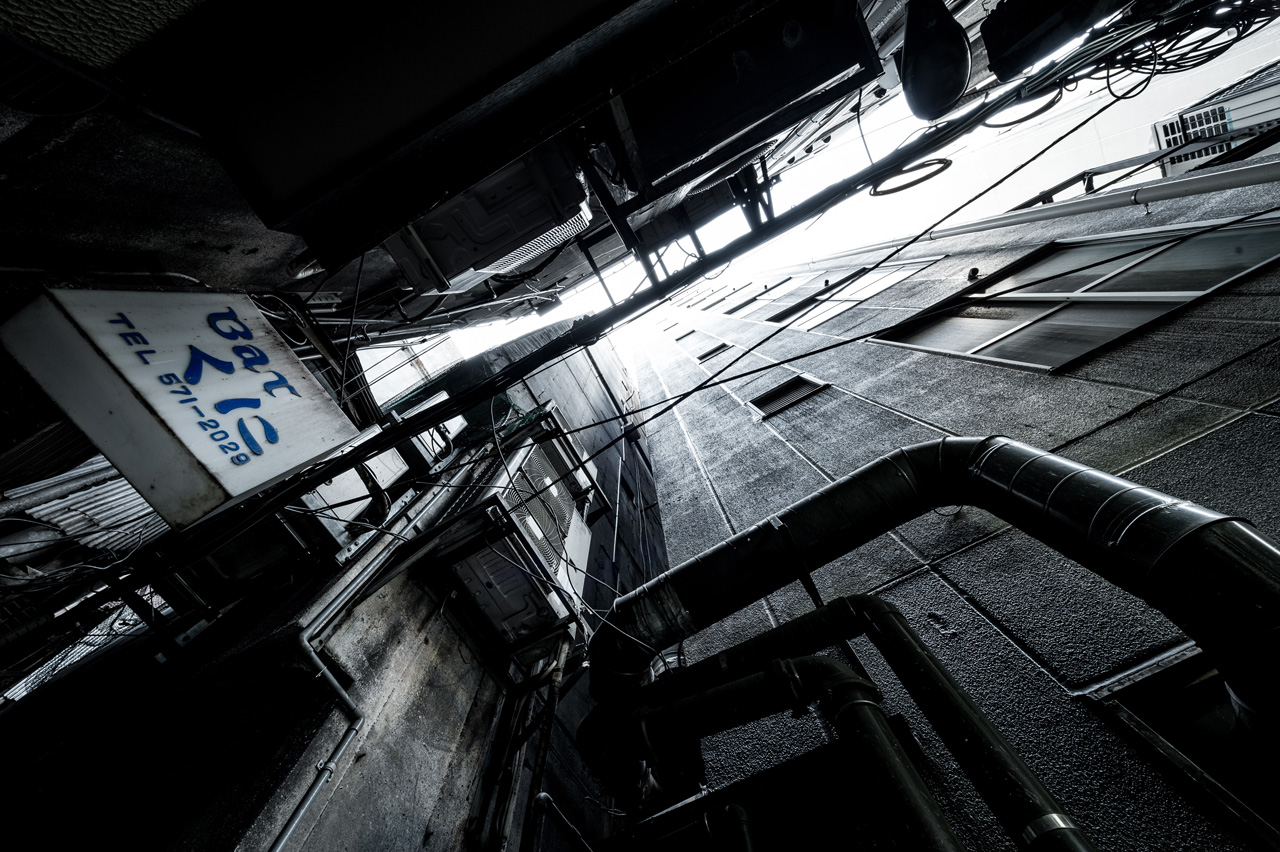 I found myself crouching in a puddle of water and grease, hunkered down in the dim twilight of a narrow crevasse in the canyons of Ginza. The afternoon sunlight was a distant dream ten stories above trickling down along dust-caked walls.

The aroma of trash permeated the air, a rat scurried past and entered a crack in the pavement as if absorbed. But I ignored all this and focused on what brought me to such an unpleasant place—the photography.

One afternoon a nagging curiosity led me into the tiny back alleys of Ginza, hidden away from the neon and glitz of the Ginza strip. That question fueled a fascination with the narrow slits formed by the buildings packed tightly together. I fell in love with the atmosphere created by the sunlight finding its way through the narrow spaces, illuminating the duct work and wires that drape the concrete as organically as vines in a forest. 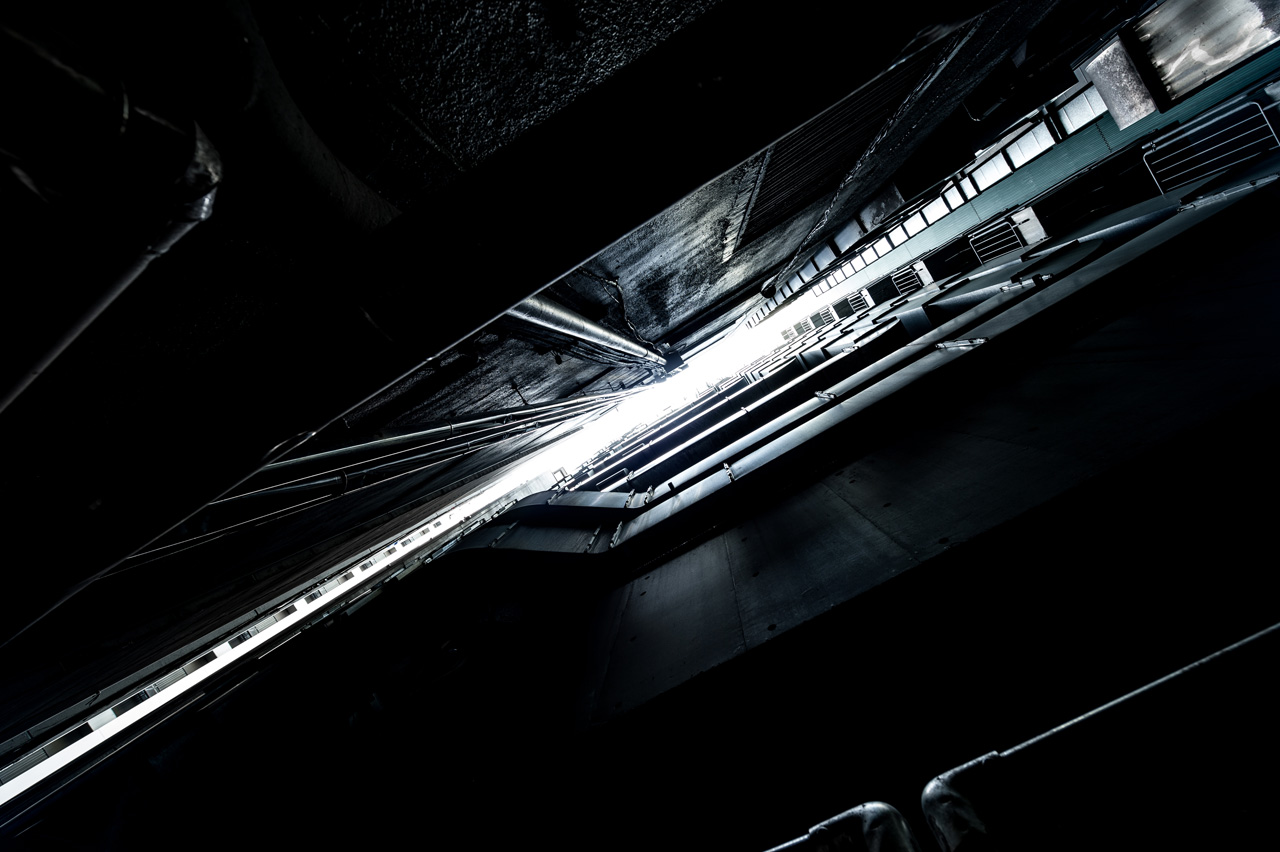 Why does this interest me so much? To me the city is a living organism. It breathes and grows, parts of it die and are cut away, only to be reborn. Treating the city as a synthetic ecology leads me to explore its various biomes. These tiny back alleys are one such biome, and so here I found myself.

At first, I didn’t come prepared so I shot these locations with camera in hand, at a wide aperture (f/2.8) and high ISO (3200). This was a good proof of concept but it produced images too noisy and without enough depth of field (DOF). My plan was to return with a tripod to better shoot in the low light conditions of the crevasse. And so, I did. 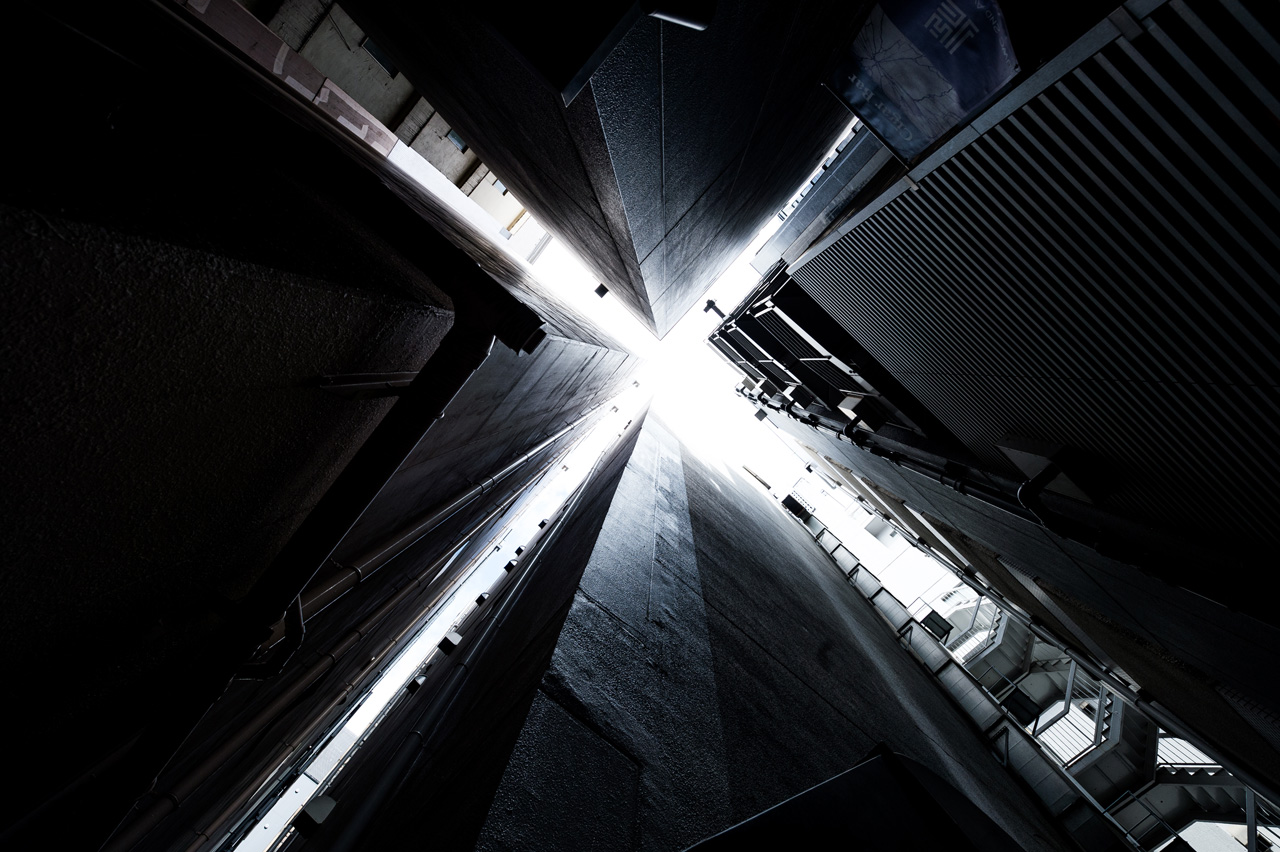 My goal was to create an effect where the narrow spaces turn the sky into a mere sliver of white light. To achieve this meant two things: 1) shooting on a very wide focal length to make the light appear even more distant and narrow while making the walls appear to close-in on the viewer, and 2) exposing the scene for the shadows to bring out the details of the walls and allow for the light to ‘blow out’ and become a pale white.

The biggest challenge was focusing. In these conditions autofocus was unreliable, so I used manual focus in live view mode. This lets me blow up the image on the LCD screen and ensure tack sharp focus on the details. Compositions were also tricky due to the tight spaces.

The final piece of the puzzle was the edit. When working with the images in Adobe Camera Raw, I went for a low saturation and high contrast look that emphasized the details while also instilling a cool and sterile atmosphere. The goal was consistency across all images to ensure a cohesive theme.

I was not the only one present in the urban understory. There were of course the ever-present rats, but even they were not the only inhabitants. The alleys are also lined with the back doors of high class restaurants. Every once in a while, a chef or waiter would take out the trash. When they saw me, I could feel their curious looks. I heard them telling their coworkers in Japanese about the weird foreigner huddled behind a camera next to a bag of rotting leftovers. I felt weird. But I reminded myself that if I’m weird then I must be doing something right. Being a weird photographer means that at the very least I’m thinking outside of the box. And this is a good thing.

I learned and reinforced a few concepts we regularly teach on our photo adventures during this project: don’t be self-conscious, be curious, and embrace the weirdness. I didn’t worry about what people will think of me hunkered down in dingy back alleys photographing the mundane. I allowed my curiosity to freely dictate what interests me and I didn’t give up on the idea until I explored it deeply. I did some preliminary shooting, and went back and came up with a better plan of action. Then I went back and shot some more. Finally, I embraced the weirdness of the project and didn’t try to justify it to anyone or even myself. I just went along with the flow.